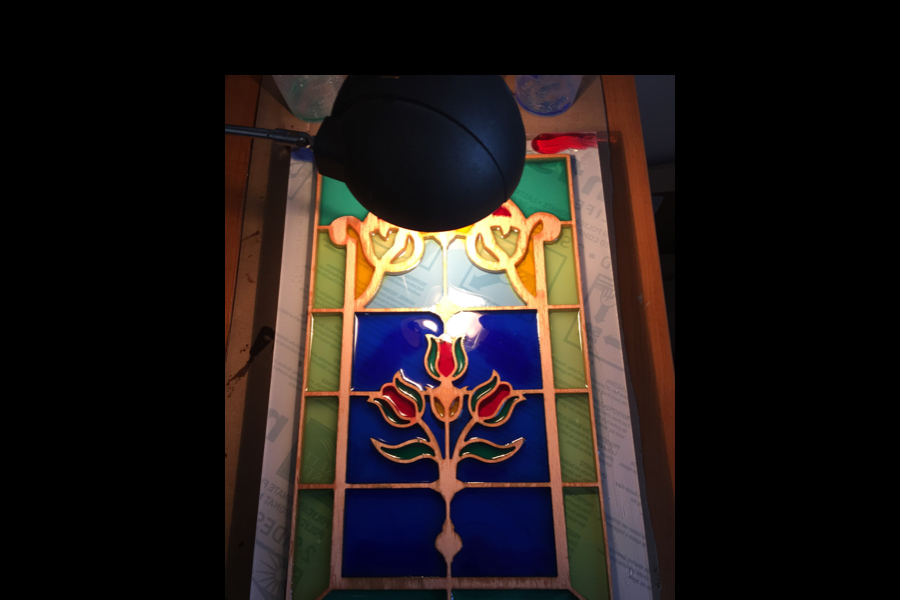 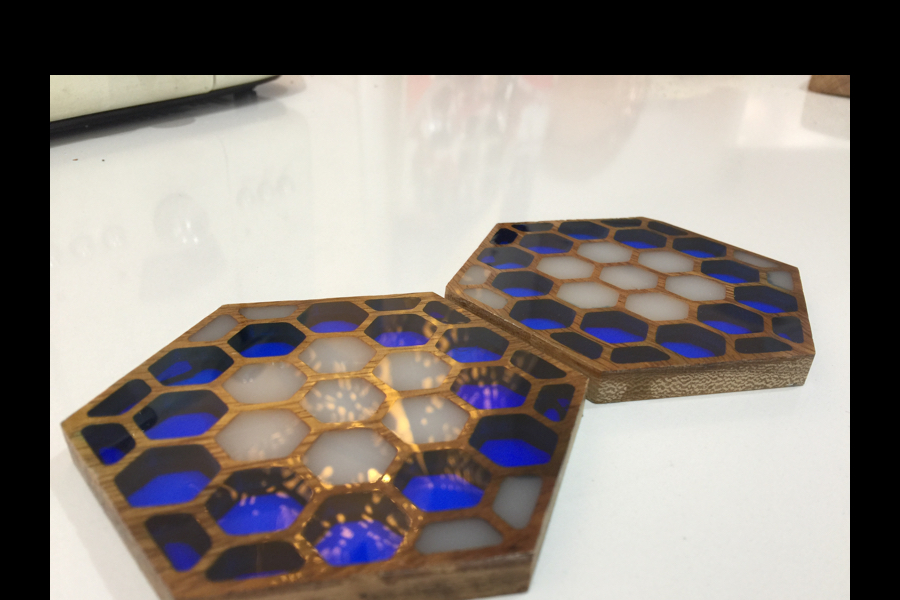 I wanted to make some coasters with that ‘I want to pick it up’ fascination, but practical and repeatable too.
The Drinks Coaster design is a honeycomb hexagon, cut right through with small hexagons. I set out three per piece of mahogany-like wood I had. The balance being to make them fine enough structures to be interesting, yet solid enough to be robust and let some of the natural wood show.
The faux Stained-Glass window is a piece of art, but constructed and made using the same process and approach as the Coasters.

The design is a honeycomb hexagon, cut right through with small hexagons. I set out three per piece of mahogany-like wood I had. The balance being to make them fine enough structures to be interesting, yet solid enough to be robust and let some of the natural wood show.

Toolpaths included tabs so the workholding was simpler - I didn't know what interaction the resin might have with glue residue, so chose not to use tape/glue for this. I used a 1/8" downcut 2-flute cutter, DOC 0.8mm, WOC 1.8mm, RPM 20,000 and Feed 400mm/min which was I feel quite conservative, but my time is hobby time and so slower with no broken end mills is a success too for me.

The cuts came out really nicely, and having trimmed the holding tabs, was ready for resin pouring. I wanted a 'perfect glass' finish on one face, so the options were: Eternal polishing, or: Pouring face down onto a piece of glass - I chose the latter.

Using water-clear, 2-part resin (Amazon) and a pack of various liquid tints, I tried some samples to get colour 'strength' per drops of tint (broadly, I found these transparent colours worked with 8 drops per 100ml of mixed resin). The first step was to paint a fine coat of clear resin on the face-down surface of the wood and clamp the part onto the glass whilst this sets - the purpose of this being to seal the wood against the glass and stop any colour bleeding between honeycomb cells. I didn't fill right to the top of the cells either, say 2mm below the surface, as I found a really nice Meniscus effect happens with this proportion and so one side of the coaster is glass-smooth, the other is 'old world curvy glass'.

First pair poured and very happy with that. The only issue was adhesion to the glass made it tricky to 'pop' the coasters off once set - I switched to plexiglass for the second set as a gentle flex was all that was required to release them, but I still got the glassy finish.

To achieve the controlled pours, especially in the smaller cells, I used a silicone pouring jug and pinched the spout to get a very fine 'spout' that was easy to control. Any left-over resin was easily removed from the jug by just squashing it in my hands until all of the resin had released.

Very happy with these results, so were family members who no surprise got 'hand made' coasters as gifts... In fact I was so emboldened by this that I decided to try something more ambitious - a stained-glass window made using the same techniques.